The next romance route is...! 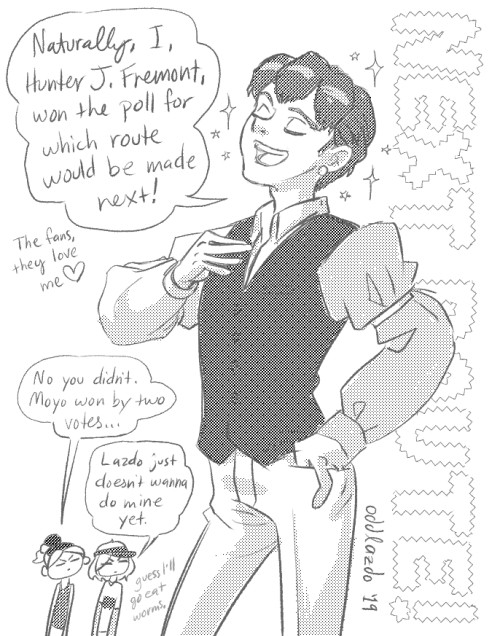 Last time, I posted a poll asking you all which condimen's route you wanted to see added to the game next. I am proud to announce that the poll is closed, and here are the results!

Ooooh man!!! I don't think I would have ever predicted these results! A few observations:

1. I'm weirdly giddy about how close Hunter and Moyo were. It's like their rivalry has been made manifest among the players?!?!
2. Sweets is third?! Either he's more popular than I thought, or you guys really want to know more about him!
3. Don't worry, Jean fans. I know you're men and women of culture.

So, looking at this, you might be thinking that Moyo is next, right? Well... to be honest, I'm really not ready to do Moyo's route yet. I'm still working out his route in my brain. And he's a pretty mysterious guy, so I understand your curiosity about him, but if I put it off for a little longer he'll maintain that mysterious aura for a while longer.

Whereas with Hunter, I have a much stronger idea of what I want to do with his route, which would translate to a shorter development time. At the beginning of this year, I set a goal for myself to finish two routes in Saucy Suitors before 2020, and while I might not meet that goal (there's only four months left in the year? What the hell?! Where did the time go?????) I'd like to get as close to it as possible. I think it's realistic for the next route to be in beta tested with placeholder art assets by the end of the year, but that'd only be possible if I can make good time on writing the route itself. Stronger ideas = more motivation to get it finished and less time spent trying to decide where to take the story next!

So, the next route will be the Ketchup Tycoon, Hunter J. Fremont! Just what his ego needed, huh. I hope everyone looks forward to it, and thank you again for supporting Saucy Suitors!! It means the world to me, and every like, every comment, every share, every follow makes me feel incredibly happy, you have no idea!

I made an account just to say that even though I just started playing, havent finished yet, I WANT HUNTER'S ROUTE SO BAD 😭😭 I cant wait to play when it updates!!!!!!!!!

Hunter my boy, it is your turn!

I'm excited. I was fine with either him, Huey, or Moyo. I expected one thing from the plot when playing the demo, so when Sho's route came out I was blindsided by Naruto. I can't even imagine what the heck is going to go down in the tacky tycoon's story.

I would personally fight all of you for not picking my boy, Huey. (I'm kidding) But, I'm excited for the upcoming route! Love, love this game to bits.

omggggg~! thanks, creator!  good luck with the process, take your time, and most importantly, have fun!  take care not to burn yourself out, we'll always support you and your wonderful game :3

So we shouldn't confuse Hunter with the facts then...