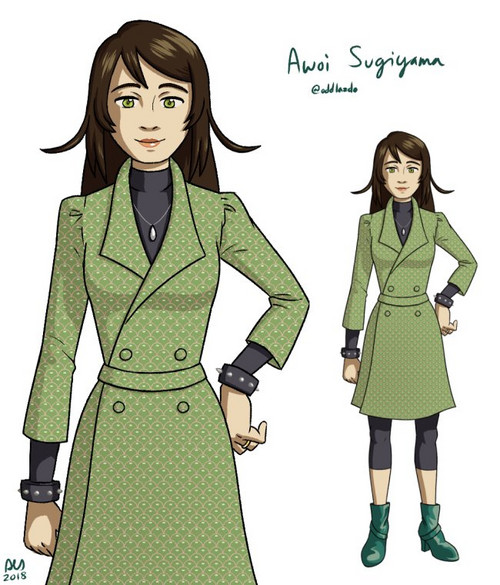 Hello, itch.io friends! It's been almost two months since my last devlog, so I'm here today to give a progress update on the game!

As I mentioned last update, I started my post-NaNo dev with Sho's route. That's still in progress, but it's coming along nicely! I estimate that the script is about 35% written, with a current word count of 12,000 words. Early in the route, Piper has the choice to pick between two options for what dish she'll make for the cook-off - I'm planning on all of the routes having this element to them. And independent of that choice, there will be three different endings for Sho's story. So when I say that the route is 35% finished, it's mostly unfinished dialogue options or alternate scenes I haven't written yet - in terms of the overall "true route," I'd say it's more like 60% done. Yay!

I'm also working on the art assets as I write, of course. Although relatively few assets are needed, because I'm a one-person team and I work on the game in my free time, it's going to take a while to get it all done. But I'd like to share one new talksprite that I've finished with you today, and that's the new side character Awoi Sugiyama, pictured above. She's a side character during Sho's route. I wonder who she could be and what relationship she has to him? ^_^

A few other thoughts/updates/questions that I'm pondering at the moment:

1. Method of release. Would you guys prefer that I slowly update the demo as more of the game is finished, or would you rather I release it all at once, even if that doesn't happen until 2 years from now or something? Leave a comment if you have a preference. <3

2. Finding help. Part of the reason that development is progressing slowly is that I'm a one-person dev with a day job and a social life. There simply aren't enough hours in the day for me to make Saucy Suitors any faster than I already am. (And maintaining NaNo pace is a bad idea - I gained 5 pounds in March when I made the demo and I felt pretty burnt out for three weeks afterwards. x_x) I've been very hesitant to look for help making the game, though, because I don't have the money to pay people for their time, and I personally think that it's too much to expect others to volunteer to help me with my amateur pet project that I intend to release for free when it's done. Still... the thought of looking for more team members unavoidably comes to mind all the time, because there's no doubt that having even one other person help me make the game would make it happen A LOT faster. What I need the most is an editor (not just proofreading, but someone who can give me critical feedback on where the story and characters need to be improved) and maybe a coder, although I can probably manage the coding the game will require with some determination. In the slim chance someone interested in helping is reading this, please leave a comment or send me a DM on Twitter at @oddlazdo or on Discord at Odd Lazdo (Amanda)#2470! (But seriously... it’s gonna be a commitment, and like I said, it'd be unpaid!)

3. Social media! My devlogs here on itch have been sparse since the demo was uploaded, but did you know that I post more frequent updates on other sites all the time? New artwork and progress updates have been shared on my Twitter (linked in the previous paragraph) since the beginning, but Saucy Suitors now has a Tumblr blog as well! Check it out and follow if you'd like updates more frequently than once every two months or so. I'd like to keep itch.io devlogs to a minimum, reserving them only for when I have big announcements or have uploaded new content to the demo.

Anyway, that's it for now - as always, thanks for your support and interest in my little game. Don't forget to fill out the feedback survey if you haven't already. I'm glad the response to it is as positive as it has been so far, and I'm looking forward to someday sharing the full version with you all. ^_^ Until next time!

Will this be a commercial game?

hi! thank you so much for playing and enjoying it!! ^^

what do you mean by commercial game? as in, will the first version cost money? i'm planning on turning "pay what you want" back on in the future, but there will always be an option to play the game for free!

Yeah, sorry, will the game cost money or is it free to play is what I meant.

In terms of releasing I would prefer that full routes be released as they are available (so for example don't update with Sho's incomplete route now but don't wait for all the routes to be finished before releasing it).