A mirror of this devlog is also available on the Saucy Suitors Tumblr.

Hi all! I’m here with another progress update. I’ve got some good news to share with you this week: the first draft of Sho’s route is 95% finished, and it’s been sent to my two awesome volunteer editors to begin the editing process while I finish that remaining 5%. It’s basically done except for the few minor things I have to finish writing. Yay!! ✨

I’m sure you’re wondering why it took so long to finish - or maybe you aren’t, but I’ll talk about it anyway. My original idea for the route way back in April or May was for Piper/the player to have the choice of what to cook with Sho for the cooking contest - and that depending on which one you pick, a large chunk of the middle of the route would be different. In practice, this ended up making the route fairly complicated, to the point that I was basically writing two routes that lead to the same possible endings. So, when Sho’s route is eventually finished, you’ll actually be able to play it again and see several completely different scenes and dialogue options.

I’m proud of how it’s turning out, but suffice to say, I probably won’t be doing something that complex with any of the other routes, once this one is done. ^^;; It’s caused the route to balloon into something much longer than I ever intended, and it’ll require a lot more proofreading and playtesting than if I had just employed a little creative self-control. But I’m learning how to make VNs as I go along, so I’m considering it a learning experience! ✨ 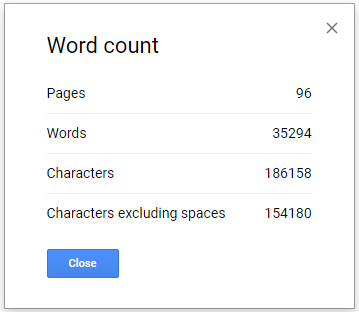 That’s a real screenshot from the Google doc. I don’t think the route will go past 40,000 words by the time I finish the last 5%, but it might get very close. Whew! x_x

No idea when the route itself will be complete and uploaded to Itch.io, considering that all my estimations on those things have been wrong so far. 🙃 On top of that, after my huge writing marathon during September, I’m in need of a short break. But my goal at this point is to ramp up my efforts to get the art assets finished once I’ve had my break, and you can be sure that everything I get done it eventually get posted here! ✌️

Additionally: I'd like to do an update of the demo here on Itch sometime soon - there's been some big additions, including adding the points/romance system into the game! I just haven’t completed testing it yet to make sure it spits you out onto the route you’re supposed to get each time. Instead, I was getting out the first draft of Sho’s route. Now that it's nearly done and my editors are going through it, updating the demo will probably be on the short list of other, non-writing things I’ll be getting to. Please look forward to it <3

Finally, check out these day 2 outfit talksprites for Sho, Moyo and Huey that I recently finished for the game! ^_^

As always, thank you for playing and for reading! (and I’ll be posting this update to tumblr today too, so sorry for the repetition if you follow me on both sites!)